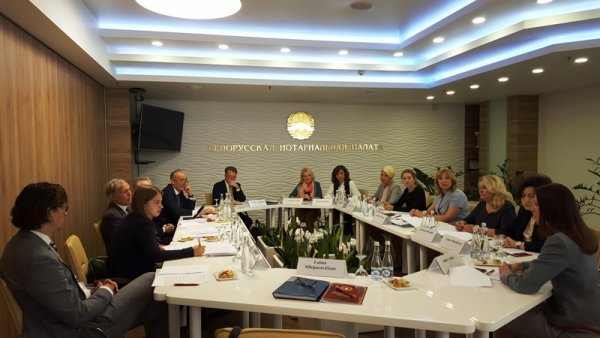 International experts endorse Belarus notaries' membership in the International Notaries Union (UINL).
Such conclusion was made after UINL's delegation visit to Minsk on August 5-6, 2019. The delegation consisted of members of UINL's Commission on International Notarial Co-operation (CCNI), including it's chairman Franz Leopold, notary of Austria.
The long-awaited decision regarding Belarus' accession to UINL as its full member is expected later this year, during the UINL General Council and members' General Assembly in Jakarta, Indonesia, due to take place in November.
"This is a huge accomplishment to Chamber of notaries of Belarus, Ministry of Justice of this country, as well as international notarial experts", President of Lithuanian Chamber of Notaries Marius Stračkaitis, a member of CCNI, said.
After the fall of Soviet Union nearly 30 years ago, state-run notariat in Belarus was reformed in accordance to Latin type, but later the old state-run arrangements have been re-introduced. Several year ago political decision was made to re-establish Latin type notariat. Legislative changes have been made in order to implement the necessary legal reforms. Notarial reforms have been supported and consulted by UINL, including notaries from Germany, Switzerland and Lithuania.