As shown by the sociological study, Lithuanian citizens choose notaries as the most trustworthy officials among the legal entities tenth year in a row 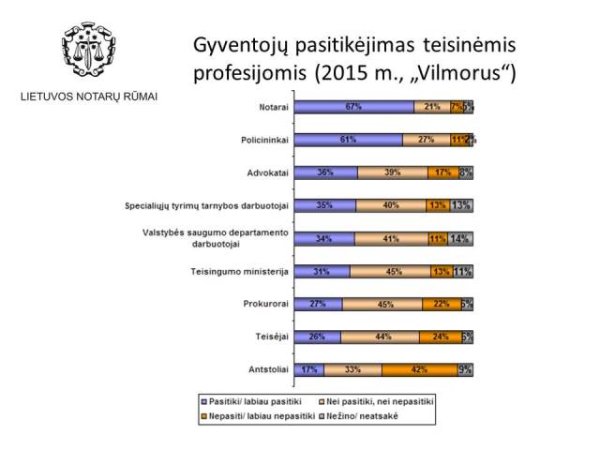 notarurumai.lt. Tenth year in a row Lithuanian citizens choose notaries as the most trustworthy officials among the legal professions and institutions. According to representative sociological survey, the trust for this profession has further increased.
The police have taken the second place in the chart of trust of Lithuanian citizens. Their position has changed from third to second place within a year that edged out the attorneys. The survey was conducted in October prior to the incident that has overshadowed police officers’ image during which a suspect with an automatic weapon escaped in Vilnius.
According to sociological survey carried out by “Vilmorus” company, notaries are in the leading position trust-wise among the legal professions: they are trusted by 67% of respondents, while 7% of residents show distrust. In last year’s survey conducted by RAIT company, notaries gained trust from 61% of respondents, while 6% of them expressed distrust.
Public trust in the police has increased significantly. This year the results show that the police are trusted by 61% of respondents, 11% express distrust. Last year, the police were trusted by 42% of respondents which gained them 3 place.
Citizens’ trust in the attorneys has dropped from second to third place. According to “Vilmorus” survey, this year the attorneys tend to be trusted by 36% of respondents while 17% declare distrust. Last year these figures made 43% and 17% accordingly. Further in the survey trust is indicated as follows: Special Investigation Service staff (trusted by 35%, distrusted by 13% distrust), State Security Department staff (trusted by 34%, distrusted by 11%), the Ministry of Justice (trusted by 31%, distrusted by 13%), public prosecutors (trusted by 27%, distrusted by 22%), judges (trusted by 26%, distrusted by 24%). Bailiffs are the least trusted officials (trusted by 17%, distrusted by 42%). That is the only legal profession which number of distrusted respondents is higher than trusted. The president of the Lithuanian Chamber of Notaries, the notary of Klaipeda, Marius Stračkaitis, notes that the notaries, persons acting under the responsibility of the State and ensuring the primacy of law in the civilian area, receive the greatest trust from people annually starting from the year 2005.
“Sociological studies carried out for 10 years show that the notaries are trusted by the biggest number of people among other legal professions and institutions. This is no coincidence. It is a stable assessment of our profession“, said M.Stračkaitis. Respondents who expressed distrust in the notaries (there were 7% of them) were asked an open question regarding the reasons of distrust. Most often people who does not trust the notaries mentioned dishonesty – 44% and high fees – 32%. Most respondents (64%) think that there are a sufficient number of notaries in Lithuania. Lithuania currently employs 262 notaries. Respondents were asked whether in the recent 2 years they had their affairs managed at the notary’s office. 34% of citizens have managed their affairs at the notary’s office. Most frequently these are respondents with higher education – 44% as well as with higher income (351 EU and more per family member) – 46%.
Respondents who managed their affairs in the notary office were asked about the service quality. Most notaries’ customers (73%) are satisfied with their services, while 5% are dissatisfied.